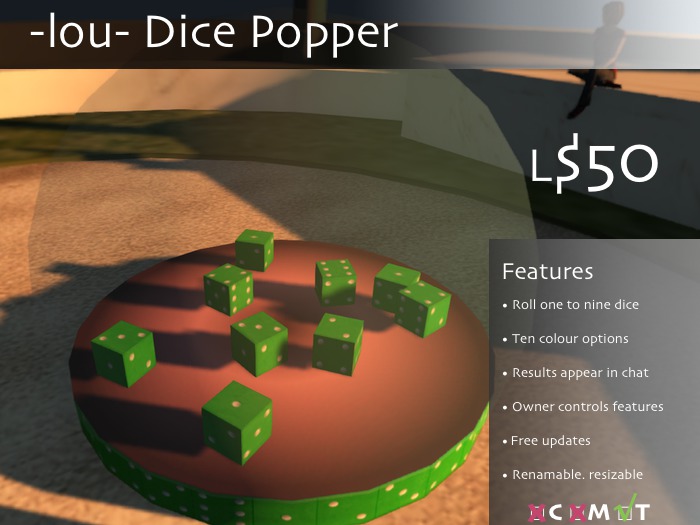 Add the element of chance to your events—or just have some fun! Click the popper to roll anywhere from one to nine six-sided dice: the dice will pop up into the air, rattle around, and once they've settled the popper announced the total in open chat, along with who rolled, how many dice were in play, and optionally whether anything like pairs or straights turned up. (You can still count up the pips yourself if you like!) Great for games, events, and contests!

The popper isn't designed for any particular game, but has features that should enable it to be used with just about any game that uses traditional six-sided dice.

The dice "roll" by being tossed up into the middle of the popper with varying amounts of spin and force, and relying on Second Life's physics engine to bounce them around and settle them down. The popper doesn't use a random number generator or any other method of predetermining the result.

When I pick up the popper, it leaves the dice behind!

The dice are separate objects from the popper: they aren't part of what Second Life calls a "link set." (That way they can use SL physics.) Unfortunately, Second Life doesn't have a way for scripted objects to detect when they're about to be deleted or taken back into inventory, so the popper can't tell the dice "Yo! I'm being picked up by my owner! You guys get lost!" However, after a few minutes any dice that have been left behind will notice their popper is gone and delete themselves, so there's no need to fuss over them. If you need them out of the way immediately, they're disposable: just nuke’em!

I rezzed a bunch of dice, but the popper never says I rolled a full house? Why not?

When you roll more than one die, the popper can optionally report whether any pairs, three of a kind, etc., (all the way to nine of a kind!) turn up, along with straights various sizes, (four, five, or six dice). However, a "full house"—combination of a pair and three-of-a-kind—is only meaningful if you have five (and exactly five!) dice rezzed. So, if you've rezzed five dice and roll a full house, the popper can (optionally!) tell you. If you've rezzed more than five dice, a full house is just a pair and three of a kind.

The popper is no-mod, but why is it also no-copy?

Because these poppers are cheap. If you need more than one, you can buy quite a few of them for less than what most creators would charge for one popper with these features. If you need a lot of poppers for some reason, get in touch and I'm sure we can work something out.

Why is it so big? I wanted something I could put on a coffee table!

The popper is resizable (both larger and smaller—check the control menu) but the Second Life physics engine constrains how small the popper can be and still work. Sorry. I could make a super-small popper that would pretend to roll a certain number of dice and show the result, but that would essentially just be a random number generator. At that point, you could get Kyrie and ask her to, say, roll five dice. She'll give you a number.

The six-sided dice popper owes its existence to Maggie Sewell, who uses dice in a number of her Second Life trivia games, and was struggling to find dice sets that did what she wanted. Rain Ninetails and Cygnoir Blanc also offered helpful suggestions and feedback.